At eight twenty in the morning, all the team leaders are neatly lined up at the factory gate to listen to the staff preaching process requirements, competition and other precautions. Ten minutes later, the race was officially started in a workshop. After receiving the necessary tools and materials, the team leaders quickly found their own workbench, concentrate on cutting, ironing, spotting, sewing ... ... three hours later, from cut pieces to ready-made garments, From a pair of clever hands turned out. At one o'clock in the afternoon, Chen Liusong, the head of 8 workshops in five workshops, handed over the garments to the auditors in the first place. Subsequently, other leaders also began to deliver one after another. 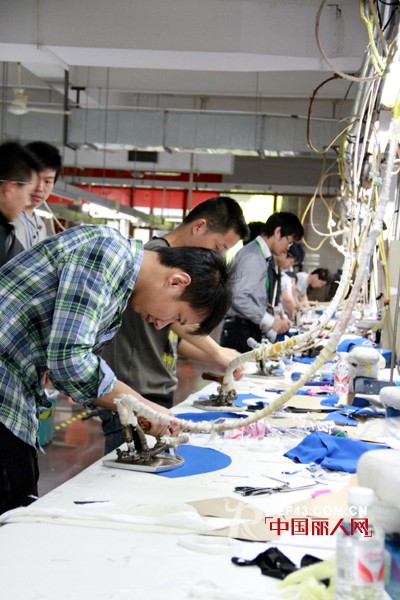 Flying needle in the workshop where the line, there is also overwhelmed the test room. Judges also seem to compete in two sets of test efficiency, fast check the goods at the same time, do not miss a detail. Inspection site contains the cloth surface, collar / header, the former film, sets of people, internal, a total of 31 scoring criteria. After the test, then the audit staff scanned the QR code logo on the garment to identify the name of the participating team leader and register the final grade.

Through the head of skills competitions, the purpose is to encourage the head of the team in their routine work, and often grasp the skills are not lax, improve the practical guidance of team members, and speed up the control of production efficiency and quality assurance. At the same time, this is also a basis for assessing the level of leader.